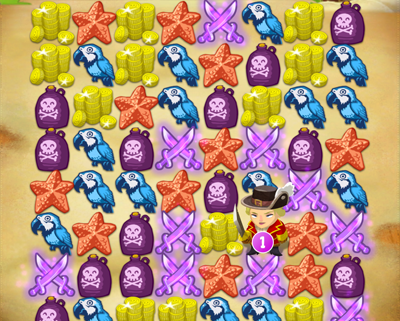 Previously, I shared out the game evaluation worksheet I use when playing games. It’s more than just a fun pastime for me—although I definitely love to play. It’s also part of the idea generation process for the games I design. I’ve said it many times: “you can’t design a great game if you don’t play games.”

What does it mean to evaluate a game? What format should you use? Read on.

What is the game goal? Was it fun?

The game goal is for you to find the “ultimate sea shanty” (which has amazing powers). Yes, it was very fun!

What were the core dynamics? Were they fun?

The two main dynamics of  Scurvy Scallywags and Candy Crush are exploration and alignment, and the concept is very simple. In Scurvy, you have a large map with numerous islands  on it. You direct your ship to various islands and then select specific locations on the island to explore. Once you select a location, the second dynamic, alignment, comes into play. Specifically, you have to find three in a row of the same object (a coconut, a spider, flasks, etc.).

Swiping these items helps you align power swords that increase your character’s power in the game and lets you defeat other pirates. This, in turn, earns you gold as well as a cache of objects you can sell for gold.  We start learning pattern matching in preschool, so this is not complex game play. Neither is the exploration dynamic in this game as you are merely tapping locations on a map.

What were three game mechanics that stood out as good/bad?

Which game elements did you notice as you played? Write a note on one that stood out and explain why:

How did you know how well/poorly you were doing in the game? What feedback did you get?

Download the Game Evaluation Worksheet for yourself! Use it to evaluate game mechanics and game elements for use in your own serious games.