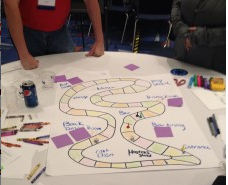 Previous posts in this learning game design series have focused on sexy stuff such as game goals and core dynamics, game mechanics, game elements, or scoring and rewards. This final post is about the critical importance of playtesting your game as you move through development.

Designing  a game is different than designing an eLearning solution. There is a totally new term that comes into the process: playtesting. Playtesting is NOT usability testing, focus group testing, quality assurance testing, or internal design review. Playtesting is what you do to evaluate whether your game is really playable and that it  functions the way you intended for it to function – as a game and as a learning solution.

Playtesting helps you answer these questions: Is it fun? Is it balanced (e.g. not too hard and not too easy)? Is it complete? Did people learn what you intended for them to learn? Playtesting is not something you do once or twice. You do it several times, each time further refining your game play experience and the learning experience. For mega-games like Halo or The Sims, designers may have done up to 3,000 hours of playtesting to verify that their game worked. For a learning game you craft yourself – or with a small team – you should assume at least 30-40 hours of play testing. Gulp – that’s right. 30-40 hours of testing time. 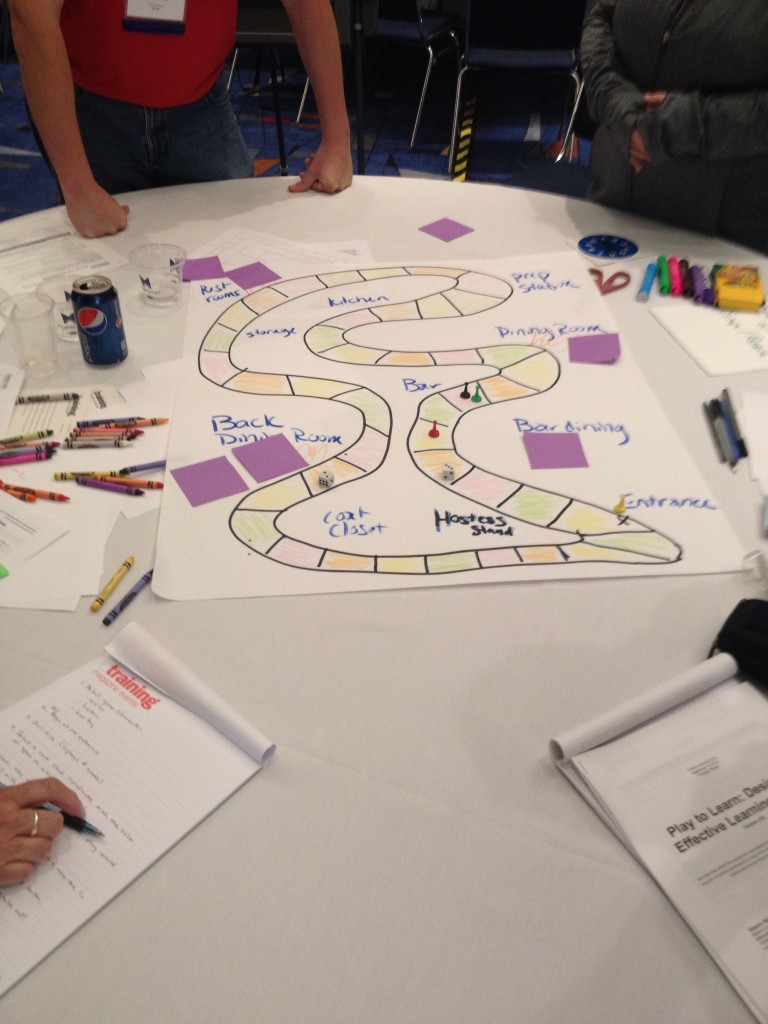 Your first playtest is with the very first version of the learning game you create, which should be a paper prototype. The image above is a paper prototype participants created in the Play to Learn workshop that Karl Kapp and I do together.  It’s rudimentary, but it gets the job done. The game designers and learning designers very quickly discover what works and where the holes are – and there will be holes. They’ll also come up with new ideas or ways to tackle problems. Here’s an overview of the three major phases of playtesting you should plan to go through. You may do multiple rounds of playtesting within each phase.

Phase 1 –  Self-test. You and your design team play the initial prototype and evaluate it. It’s okay to do a lot of discussing while you’re playing – and modifying rules and ideas on the fly as you go. You should keep game materials very basic for this test. Paper is best. If the paper test goes well, you can shift to online formats. If it doesn’t, re-do the game on paper and playtest it again as a paper version before going online.

Phase 2 –  Play test with friends and colleagues. Once you go through initial playtests with your design team and refine your game a few times, you’re ready to pull in some outside perspectives. Ideally you will include someone from your target audience.  Your team’s job  is to sit back and observes (quietly!) while others come in and play the game. At this point, you want there to be some legitimate game assets – artwork, programmed interactions, real content, scoring, and rules to follow.  You’ll debrief the experience and then decide what changes to make.

Phase 3 –  Play test with (gulp) strangers. Ideally all these strangers represent your target audience. These folks will be 100% objective, which friends and colleagues are not. I’ve learned the hard way (by going too far with internal playtesting and getting “great” results) that you need to loop in people who do not care about your feelings or the amount of time you’ve spent on the game. However, they SHOULD reflect people who really need to learn the stuff in your game. Otherwise, they can rate it lower simply because it’s not of interest to them.

We used to have a pretty big list of questions we asked. We’ve distilled the list down to five:

GBL Picks: Being an Advocate for Games, 7 Great Games, and Games for Social/Emotional...

Games and Gamification: Research from the eLearning Guild
Scroll to top