Depending on your situation, you should include an appropriate amount of chance or strategy in your serious game that reflects the work environment. As always in game design, you’ll want to avoid game elements that are irrelevant to learners. Gadgets and gimmicks within a game serve as more of a distraction than an engagement tool.

Sharon Boller talks about this at length in her learning game design blog series. With so many different game elements and game mechanics to potentially include in a game design, instructional designers new to game design often struggle to find focus and direction. We think about the “fun” of commercial games we have all played and enjoyed and try to incorporate all of this into games for our learners.

The result? Games that are distracting, out of focus and ultimately ineffective for learning.

The two game elements most commonly misused are chance and strategy. The usual mistake? too much chance. Would-be designers add lots of “surprises” to their games thinking it will make the experience more fun. The other mistake is to include strategy or chance in a game when the real answer is to use neither. Sometimes, the best corporate learning games focus on just a few game mechanics and game elements so mastery of the content can be brought front and center.

Consider the following examples Sharon gives in her blog post on game elements:

Don’t forget that chance and strategy, while seemingly very important, are only two of the many game elements available to you. A game does not need chance or strategy to be fun or effective for learning. 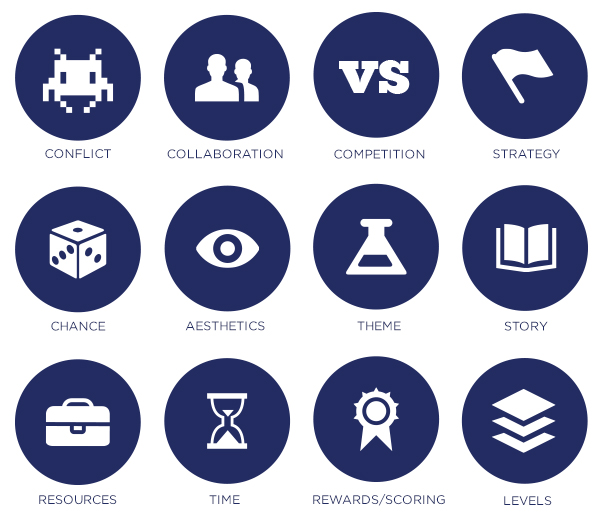 Knowledge Guru’s game play is essentially simple and straightforward. Why? Each game is really a template of sorts for whatever content you put into it. If the game had too much chance, it would undermine scenario questions where learners must formulate a strategy. And if the game had a strategic focus, it would distract learners who need to learn how to respond to seemingly random situations in real time.

So, what about strategy and chance?

You probably already know if your learners’ jobs involve more chance or strategy. Whichever is more true for them, be sure to include the appropriate game element in the game they will play.

The bottom line: When designing a game, you should never include a game element or game mechanic if you do not understand how it is linked to the desired learning outcome.

Safety & Compliance Training: Should it Be a Game?
Scroll to top