This post focuses on the first step to design learning games: play and evaluate games. If you don’t like playing games, don’t try to design a game because you’re going to hate this step. Game design is a bit like writing a book; you’d never attempt to write a book if you first hadn’t spent time reading and evaluating several books. Those who would attempt to write a book without having ever read one probably wouldn’t create any great work of literature.

So step one is to play a lot of games—and play a lot of different types of games. If you focus on one particular genre (video games, board games, etc.), then you should expand your horizons and explore different genres and game forms. As you play all these different kinds of games, think about what makes them “fun” to play and how the game’s mechanics and elements make them fun. (If they aren’t fun for you, what makes them fun for others? You’re not the target audience for every game you play.)

Read on to learn:

Why the focus on fun? Because the fun in a game helps learning happen—or is the learning. Fun is not frivolous; it’s integral to a successful game. Kevin Werbach, in his Coursera MOOC on gamification, identifies eight types of fun in games. These eight types of fun all happen to integrate nicely with learning, or are things people need to learn to do.

You think this doesn’t link to the workplace? We all like to achieve a win state – over a challenge, over a competitor, over ourselves – beating a previous personal best, for example.

Humans are goal-driven creatures. Goals are highly motivating to most of us and achieving them is very satisfying. Goals in games that link to the real-life learning we want a target group to do can be powerful and effective. You can find goals everywhere in business: reducing percentage of scrap, reducing number of safety incidents, increasing sales by X, adding X customers.  There’s behavior change required to achieve most goals; that frequently requires learning how to do something differently or better than you currently do it.

This can be triumphing over a competitor, or the game itself, or over individual challenges within the game. Many of us enjoy feeling victorious, particularly if we gained victory by mastering a difficult problem or challenge. We have feelings of triumph in the workplace as well: vanquishing a difficult project, prevailing against difficult business odds or challenges, etc.

A highly valuable business skill, this is a fun element of many games, too. People get social and emotional satisfaction out of collaborating with others. Often people enjoy collaboration much more than they enjoy competing. And organizations want people to collaborate in the workplace to achieve business results.

Games like Sims, Minecraft, and Civilization are about doing these things – and many people find exploration and building powerfully motivating and “fun” to do – so fun, in fact, that they can spend literally hours of time doing these things within a game. These are key skills inside the workplace. Exploration is an underrated business skill that closely links to something more people understand within business: research.

Lots of games feature a collection “dynamic” where players’ goal is to collect certain things. Poker is essentially a collection game—collect the best cards and you win. The Pokemon card craze of a few years ago is about collection. The board game Risk combines collection—acquiring territories—with strategizing. How will you gain those territories? Collection appeals to many people’s sense of fun and can be incorporated easily into learning games. In the business world, we often have to collect information before we can move forward with decisions.

These are higher-order thinking skills that lots of people enjoy doing. Consequently games that feature these elements have lots of fans. Chess is a classic example of a strategy game. World of Warcraft is a modern-day example. Games in the adventure genre are all about problem-solving—figuring out how to get from Point A to Point B. Problem-solving and strategizing are part of growing and managing any business, and most jobs within a business.

Many games allow us to do one or both of these things and people love doing them. Second Life, a once-popular virtual environment, leveraged people’s desire to role play by allowing people to create avatars to represent themselves. Fantasy can provide a powerful means of letting people feel free to try new behaviors and acquire new skills while feeling safe and minimizing fear of failure.

Okay, so you have a list of fun. Now, how many games should you play to help build your skill set? My answer? A lot—and never stop playing new ones! I have three folders on my iPad labeled Games, Games 1, Games 2. Here’s a view of one of these folders: 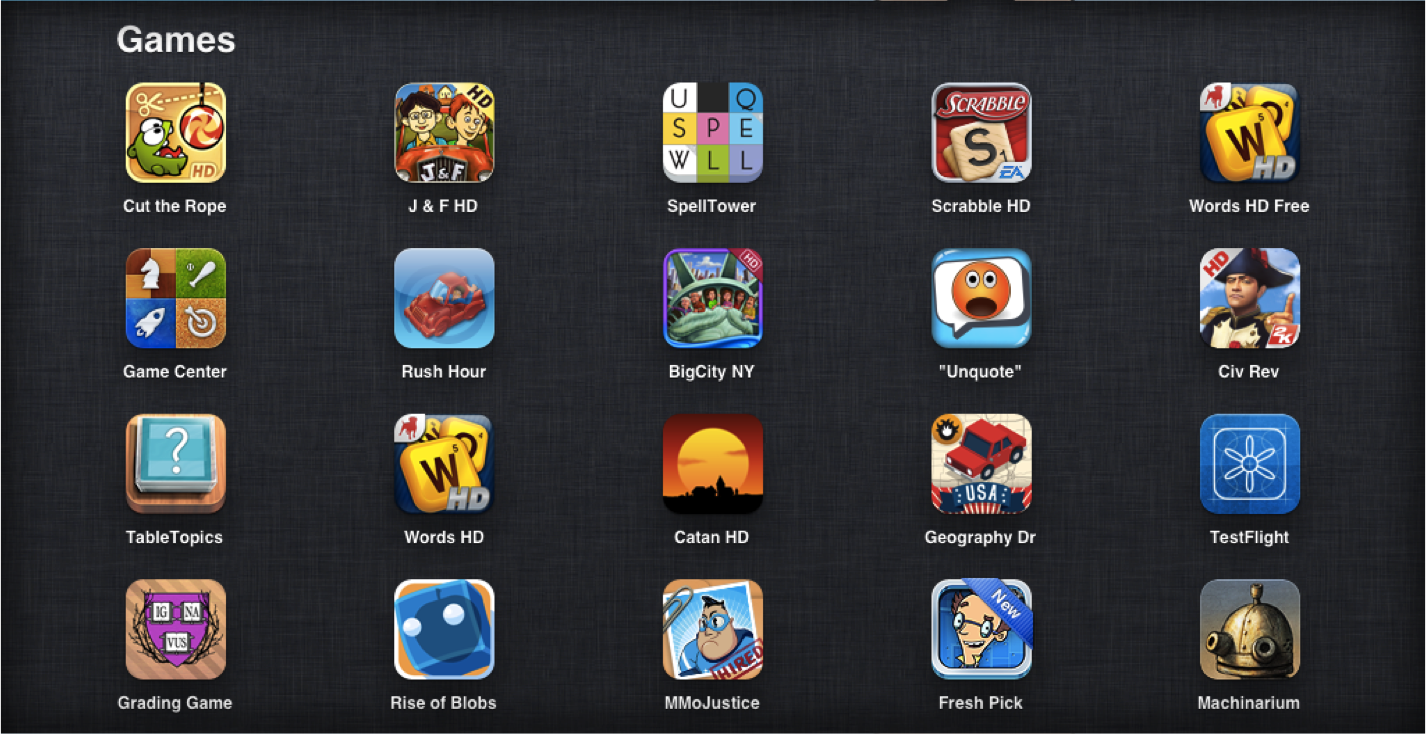 This folder contains a mixture of traditional games (Scrabble), popular games (Words with Friends, Cut the Rope), puzzle-type games, adventure games, arcade style games, etc. It’s highly eclectic. Some of these games I may only play once; others I will play multiple times (even if I don’t like them very much). I still want to understand what makes them popular, why some people think they are fun, and what mechanics within them might trigger an idea I could use in a game I create.

Evaluating what you play

Playing games for enjoyment is different than playing games to evaluate the quality and efficacy of the game design. Here’s a laundry list of questions that go through my mind as I play games with evaluation of them on my mind:

Here’s a starter list of six games to play and evaluate.  One of them is a board game, the other five are digital games. In my suggestions I’ve included some notes of my evaluation of the game design and game play to show you how I do it. (I’m not saying this is the only right way—just my way). Keep in mind I am including games in this list that I do not consider to be fun. You have to play some bad with the good. It helps you contrast and compare.

This is one of the best games I’ve played and I admit to loving it. Here’s some of my notes and evaluative comments:

Additional games for you

Now, here’s five other games for you to play and evaluate. I’ve given you one or two things I’ve noted, but you can come up with plenty more on your own.

This is an old-style adventure game. Pay attention to the complete lack of rewards and achievements in this game. Why aren’t there any? Does it need them? (No, the task is the reward. It’s interesting to solve the challenges. The reward is the satisfaction from solving the challenges.) Other things to evaluate are the aesthetics and the contrast between game play on the desktop and the iPad.

Rise of the Blob

I loved this game design. I thought it was very clever. See what you think about the aesthetics, the game goal, the use of negative, almost mean, feedback (traditionally a no-no in learning games), and the very punitive use of time as a constraint. On the negative side, what do you think of the placement of the “teach” info on grammar rules? Could that be improved? If so, how would you do it?

This game is targeted toward grade schoolers. Pay attention to the aesthetics, the reward system, and the strategy choice of selecting numbers or symbols. It’s also useful to notice how they incorporate levels of play and achievements. Ask yourself whether you think the game goal (releasing fire flies) is appropriate for the game’s target audience. How much repeat play do you think the target audience would do?

This nifty little game is supposed to teach algebra—even to five-year olds. See what you think. Does it stand alone as a teaching tool or should it be combined with some other form of instruction? Do the aesthetics have broad appeal? What about the 3-star system for letting users track both completion and achievement? (You can progress if you get at least a single star but 3 stars indicate you’ve solved the problem in as few moves as possible.) My opinions? I would use the 3-star system myself; the game allowed for players to progress while also giving evaluative info about how well they performed. The aesthetics were simple but clever. I would NOT have learned algebra with this app alone but it would have been great combined with formal explanations offered by a competent teacher. (I hated algebra, by the way. This game would have really helped.)

How to Write Iterative Questions in Knowledge Guru