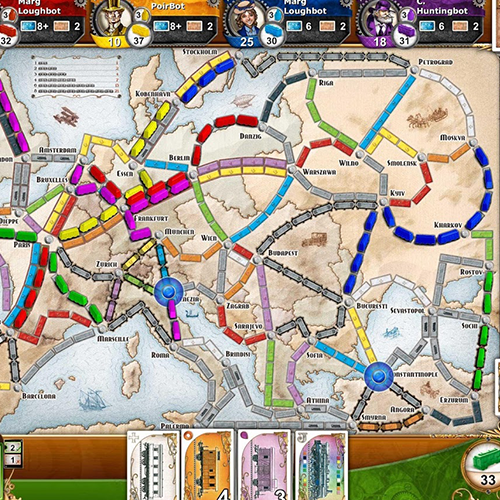 At Bottom-Line Performance, we have a “learning game design peer group” that meets a few times per year. I started the group three years ago to help build game design skills and to foster deeper knowledge of the power of games as learning tools. People who design games need to play games to gain perspective and understanding of core dynamics, game mechanics, and game elements and how these all weave together to create a good or poor game experience.

Here are three great games we have played within our peer group. All three are commercially available; one is marketed explicitly as a learning game. I’ve made a few comments about each one to help people understand the value of playing and evaluating the game design of each one

This is a cooperative game rather than a competitive game, which is one reason to play it and evaluate it. It is a complex strategy game where the players work together to stop the spread of four diseases. It’s a difficult game to play—and difficult to learn—but it’s also incredibly fun. I think playing it brings out a few key questions a learning game designer should ask:

There are a ton of versions of this game, each with slightly tweaked game rules. The basic game goal, regardless of version, is to score the most points by executing the most lucrative train routes.  We explored mechanics that made this game a bit different. These are key questions to ask as you evaluate this game:

This game is actually designed for ages 4 and up. It’s a cooperative game as well. No competition involved at all. It is a bona fide learning game designed to teach players programming logic. You have a “game master” who moves turtles on a board at the direction of the players. The turtles and the game master are a metaphor for programming code and a computer. (The computer only does what the code specifies.).

We had a group of non-programmers play the game, which was designed to have several “levels” of play. As players mastered a basic level, the game master introduced a more complex element. Key questions we discussed:

Continue the lesson with Play to Learn

Want to dive deeper? Pick up a copy of Play to Learn: Everything You Need to Know About Designing Effective Learning Games. I co-authored this book with Dr. Karl Kapp, another expert in game-based learning. This book bridges the gap between instructional design and game design; it’s written to grow your game literacy and strengthen crucial game design skills.

How to Make a Game Live So Players Can Access It